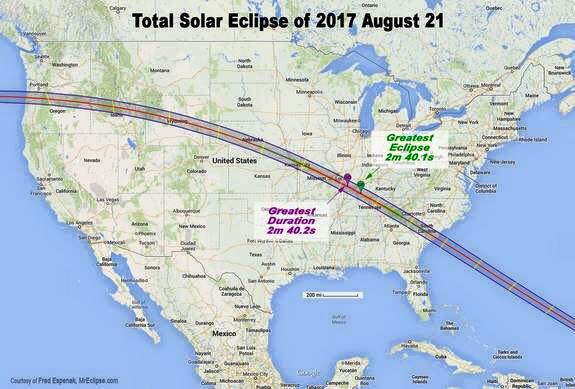 The solar eclipse occurs on August 21, 2017 at 2:14 PM EDT. It is at 28 degrees Leo, a fire sign. An eclipse in a fixed sign (Leo being fixed) will have a long lasting effect, especially in the United States where it is visible.

An eclipse in a fire sign is destructive to cattle; threatens the ruler, and causes dissension among the people. It can trigger the movement of armies, fighting, fires; and possible scarcity of fruits of the earth especially in areas ruled by Leo, i.e. California and Hawaii.
By resonance with Leo, the following countries and cities could also be effected: France, Italy, and the Alps; and the following cities: Philadelphia, Rome, and Prague. Philadelphia could experience an uptick in violent crimes.

How negative or positive this eclipse is is shown by aspects of the Sun, the ruler of the eclipse. The Sun is exactly trine Uranus at 28 degrees Aries. The Sun, in the Aries decanate of Leo, also points to Mars. Mars is 20 degrees Leo (conjunct the Sun) exactly trine Saturn, 21 Sagittarius (trine the Sun), and exactly sextile Jupiter, 20 degrees Libra (sextile the Sun). In short, Uranus and Mars give the Sun good support. This eclipse, despite all, ultimately proves more positive than negative in effect.

This eclipse is also conjunct the star Regulus, one of the 4 Royal Stars. With the Sun, Regulus gives power, authority, great influence over friends, honor and riches, but danger of violence and ultimate ruin. With the Moon, as the Moon is eclipsing the Sun, it gives powerful friends but danger from false friends and enemies. This could be taken as a warning to the President.

A solar eclipse in the 3rd decanate of Leo (between 20 and 30 degrees Leo) is said to cause profanation of holy places, churches, and sacred edifices, monuments, also rioting and destruction of towns. We have already seen this happening in the days leading up to the eclipse; there will be more following.

It is possible that this eclipse will also set off earthquakes. It is interesting to note that the maximum eclipse appears to happen near the New Madrid fault, but points as well to Oregon. There are a number of areas that may be touched off within a year.
Where the eclipse appears at the zenith, in MDT, is also where there could be earthquakes.

The eclipse taken at the Washington DC, the capitol, is in the 9th house. In the 9th house we find Mars, the North Node, Moon, Sun, and Mercury, retrograde. The eclipse is trine Uranus, Mars is exactly sextile Jupiter and Saturn. So, the 9th house stands out as very important. The 9th house is the law courts, legal matters, religion and clergy, foreign trade, science, invention, etc.
There will be important, far reaching developments in the area of foreign trade, as shown by this eclipse. Mars, the ruler of the 5th house, involves diplomacy, and Moon, the ruler of the 8th house, speaks of finances.

The eclipse is 28 degrees Leo exactly trine Uranus, 28 Aries. Uranus is in the 10th house of the New York Stock Exchange chart. This is indicative of growth.

The Washington chart shows the following about the President. He is ruled by Mercury, as Mercury rules the 10th house. Mercury is in Virgo in the 9th house retrograde in orb of opposition Neptune in the 3rd, also retrograde. Mercury in Virgo is in his best place and strong. Retrograde in the 9th is shying away from public notice. Opposite Neptune is subject to many false rumors. The media and press, ruled by the 3rd house, promotes false rumors. Mercury and Neptune, both retrograde, will repeat and repeat. There is a terribly dysfunctional relationship between the President and the media.

Mercury retrograde shows some plans falling through or being postponed. The President changes his mind and backs out of whatever he's planning. Mercury is zodiac square to the Ascendant showing his changes of mind disadvantageous to some, but is mundane trine to the Ascendant, showing the opposite. Some will like him and some won't is what it boils down to.

Donald Trump's birth chart, Ascendant is at 29:58 degrees Leo, and his Mars is at 26:47 Leo. The eclipse, at 28:52 Leo is midpoint his Ascendant and Mars. This will impel him to take some very strongly assertive actions. Nothing about war is shown.
If the eclipse were exactly conjunct his Ascendant or Mars, which it isn't, there would be reason to predict Trump's demise. However, it is unlikely. It is clear, nonetheless, that he has serious challenges coming up.

Posted by Raphael Simons at 5:04 PM No comments:

The lunar eclipse of 8/7/17 in astrology

The lunar eclipse occurs at 7:22 PM GMD. It is visible in India, as you can see. It appears to reach exactitude in northeast India, where there is a dispute going on with China about Doklam. This does not bode well for India. It will cause considerable stress there. On average, the effects of an eclipse last a period of 3 months.

There are these three aspects happening in addition to the eclipse. Sun is conjunct Mars; Mercury is opposite Neptune, (mitigated by sextile Venus); Jupiter is square Pluto, (mitigated by sextile the Sun, trine the eclipse, and sextile Saturn).
With this eclipse, there is considerable stress, especially between Jupiter - Pluto, and Mercury-Neptune, and Sun-Mars. In short, it shows aggression, duplicity, and lying.

In India, the eclipse Moon (in Aquarius) is in the 10th house opposite the Sun and Mars (in Leo) in the 4th house. This is seriously bad for the Government, and the national honor (the 10th house), and it is over land (the 4th house). Neptune in the 11th house opposite Mercury in the 5th shows treacherous diplomacy. However, it won't go too far because Venus, in mitigating aspect with Neptune and Mercury, brings peace in the near future. Venus is in the 2nd house showing what's coming up the near future. India will have to withdraw from Doklam. It is doubtful that India will be sincere about this, however: Venus, ruling the Ascendant in India, is in Cancer and the same sign as the 3rd house cusp (Cancer), showing a reticent outlook and dissatisfaction over the matter.

Meanwhile, an old prognostication of a lunar eclipse in the 2nd decanate of Aquarius is that it universally damages the seeds of the earth. This warns of coming food shortages.
Earthquake in western China.

In the US the Sun, opposite the eclipse moon, is conjunct the Sun of Robert Mueller's birth chart. The coming three months for him will be especially challenging.
The eclipse Moon is in the 3rd house intercepted, and the Sun and Mars are in the 9th intercepted. It may be that much will be going on secretively behind locked doors. Meanwhile, Mercury in the 10th house is opposite Neptune in the 4th, so the people will be entertained and distracted by scandals. The public outlook, as shown by Saturn retrograde in the 1st house conjunct the 2nd house cusp, is seriously worried about the future financial outlook. The ruler of the Ascendent is Pluto. Pluto, in the 2nd house and retrograde, confirms what Saturn is saying.


Posted by Raphael Simons at 2:51 PM No comments: