Horary astrological chart: is war is coming to Korea? 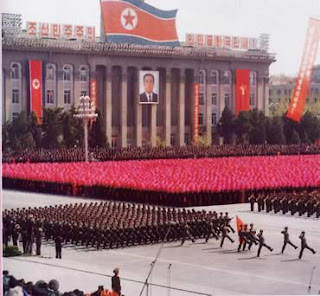 Upon reading "despite warnings from the North, the U.S. and South Korea are pushing ahead with naval exercises in response to an hour-long bombardment of artillery fire on the island of Yeonpyeong" the question came up will there be a war. To find the answer a horary astrological chart was cast in Albuquerque, NM (106W39; 35N05) on November 26th at 10:43 PM MST. Here is what it shows.

The Sun in this chart is in the 4th house in Sagittarius and rules the 1st house. Uranus is retrograde in Pisces in the 8th house and rules the 7th. The Moon is in Leo in the 12th house. The Moon is past trine to Sun and is forming no aspect Uranus but she is forming a sextile with Saturn in the 2nd house. Saturn is the co-ruler of the 7th. The Sun is also forming a sextile to Saturn. Saturn is in the 2nd house saying protection is required.

The Sun is forming a square with Uranus retrograde in Pisces. Uranus retrograde reluctantly backs down, but will in the future turn around and act up again. Uranus corresponds with Chinese backed North Korea in this chart. It is unlikely that there will be a war in the near future although the situation holds dire meanings.

Uranus is also in mutual reception with Neptune in the 7th house. This means that the potentially warring parties will be looking for a way around an open conflict through chicanery. There will be some secret military action taken but an all out war will not happen now.

Mars and Mercury are in the 5th house in Sagittarius coming to square Jupiter and Uranus in the 8th and sextile Neptune in the 7th. Harsh and defiant, even incendiary diplomatic words will be spoken.

The Moon's final aspect is sextile Venus just before Venus crosses over into Scorpio. This means that in the 11th hour peace will prevail at least for the time being. There won't be a war. But it will get pretty close.

The coming exact conjunction of Pluto (4:03 Capricorn) and the North Lunar Node (4:15 Capricorn) is exactly sextile North Korea's Mars and in no aspect any of South Korea's planets. North Korea's Mars rules its ASC and 12th house. The current series of events is bringing severe misfortune to North Korea. North Korea's Mars is in the 11th house and also rules the 5th house. Nefarious diplomatic influences are involved in North Korea's governance at this time. Pluto's conjunction the node at 4 Capricorn is also exactly opposite China's Uranus. China is in a period when foreign diplomatic relations are in danger of being disrupted. The conjunction Pluto and the Node is also opposite, although not exact to the degree, the US Jupiter showing up the currency matter. Pluto compounds already complicated problems.

The Sun applying widely to a retrograde Uranus, Sun ruling the 1st and Uranus ruling the 7th shows approach to war but the "enemy" is backing down, and, because Uranus is mutual reception Neptune, is trying to get around the matter. Sun forming sextile with Saturn (Saturn rules 7 also) is not going to war. And the Moon's final aspect sextile Venus is not about to go to war - at least for the time being.

Raphael is available for private readings and consultations. To find out more about Raphael's work please visit www.psychicarts.net
Posted by Raphael at 3:49 PM