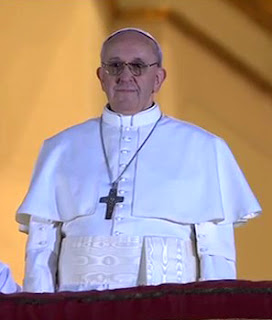 Pope Francis was born on Dec 17, 1936. The signs of his year, month, day and hour of birth are Fire Rat, Metal Rat, Water Rooster, and Water Dog, respectively. Fire Rat and Water Rooster both make him magnetic, charismatic, and convincing. He has strong discriminatory abilities and a forceful intellect, discerning truth from falsehood, and is at his best when surrounded by intelligent and productive people. His chart shows a varied career with some extreme ups and downs, and that he distances himself from his family and followers late in life.

The element count in Francis' chart gives 5 Waters, 00 Wood, 2 Fires, 1 Earth, and 3 Metals. 5 Waters gives him a strong intelligence and makes him a deep thinker, but with some danger of developing bone and nerve problems and weakness of kidney and adrenal function as he ages.

00 Wood means that whenever Wood came up in time Francis faced serious challenges in the development of his work. Wood came up in Francis' life from age 17 to age 57. Certain allies, especially in his 30s, were actually working against his better interests.

Fire is Francis' Vital Element. He has 2 Fires. Fire comes up in Francis' chart between age 47 and 82. During these years he is strongly protected. The weather in Rome, especially in summer, is good for Francis' health. He thrives in a hot, dry climate.

1 Earth is very weak. When Earth comes up Francis' life force weakens. At age 77, in 2013, Francis enters Earth Monkey cycle for 10 years. For the first 5 years of this cycle he is protected because the Earth combines with other elements in his chart to produce Fire. But after 82 he will become increasingly weak. He will probably live into his mid to late 80s, naturally. Weak Earth means weak stomach, spleen, and pancreas. Overly strong Water with weak Earth points to digestive and circulatory weakness.

3 Metals in Francis' chart confirm that he is a scholar, but, with such strong Water and weak Earth, his way of working depletes his physical vitality. Fire as his vital element tells him to become physically active and to go for long brisk walks, or even to dance, to keep up his vitality and strengthen his circulation and digestion.

Born on the day of Water Rooster with a predominance of Water in his chart, Francis appears to be an amiable character who needs to act freely and independently to be at his best. He may show independent initiative in directing programs, and may come to make significant changes in the papacy itself during his time in the Vatican.

To follow articles such as this in Chinese astrology click the join button at the upper right of this column.

Raphael's book Feng Shui Step by Step is reprinted and available at Amazon and www.createspace.com/3472024
Posted by Raphael Simons at 10:03 PM