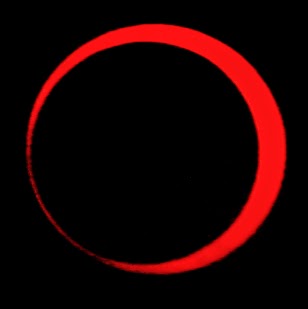 The Lunar eclipse of Oct. 8 was at 15 degrees Aries. A traditional reading of a lunar eclipse in the middle of Aries is pestilence. The first thing that comes to mind is ebola. If this is so, we can expect it to run rampant over the coming three months, at least. This will happen, especially in west Africa.
The eclipsed Moon was in conjunction with Uranus at 14 degrees Aries, and in grand trine in Fire, showing rapid growth, the grand trine being between the eclipsed Moon and Uranus at 15 and 14 degrees Aries, respectively, Mars at 16 degrees Sagittarius and Jupiter at 17 degrees Leo. The Moon was also opposite Venus at 10 degrees Libra showing losses.

The Eclipse Moon was in the 10th house of the chart of the NY Stock Exchange. While the fall equinox chart showed positive growth, from Jupiter trine Uranus, Uranus being in the 10th house of the stock exchange chart, the eclipse shows a more erratic picture developing. In the lunar eclipse chart Jupiter, separating from trine Uranus, is coming to square Saturn. With the eclipse in the 10th house of the stock exchange, and with Jupiter square Saturn, an erratic pattern has been developing. It is seen more clearly in the solar eclipse chart in which Jupiter is in tighter square to Saturn. This developing square presages a downward trend in certain sectors of the market in the summer of 2015 and spring of 2016 when Jupiter will be in exact sinister square Saturn. Sinister square means cutting off dead wood. The market will make necessary corrections. At that time the general discontentment with and in both political parties will also grow much louder. Jupiter and Saturn are the significators of the Republicans and Democrats, respectively. Saturn will be in peregrine in Sagittarius, and Jupiter will be in detriment in Virgo, bad for both. Both parties need to clean up their act. The Democrats will abandon their Potus.

The current Jupiter Saturn cycle began in the spring of 2000 that saw the beginning of the housing boom, now history. The cycle reached Jupiter dexter square Saturn in late 2006, the peak of the housing market, soon to turn. Then it came to Jupiter opposite Saturn in spring, 2011 at the low point of the recession, still on-going for many people, despite what the Government wants you to think, and in mid to late 2016 the cycle comes to Jupiter sinister square Saturn when the market will have to make corrections; it could mean deepening poverty for many people in the world. Not everything will go south, however; the lunar north node will be in Virgo, a fairly high place for the business cycle, the highest places being Leo and Cancer. So, the corrections won't mean a general disaster, despite what certain fear mongers would have you believe. The mood is fearful these days. The next Jupiter Saturn cycle will begin in 6 years, in the fall of 2020 in Capricorn, marking the start of a new cycle of growth and decay in world wide business and financial organization. The real estate market, especially in the more desirable locations, will be high at that time. It could remain high into the mid 20s (2025) when the lunar node is in Pisces and Jupiter is again past dexter square Saturn. New organization in the '20s will make for a more orderly, constructive trend in the world. Technology will advance very far. One of the more hopeful signs will be in the field of agriculture. By 2020 we will be long past the strife shown by the Uranus-Pluto square of 2011 through 2015. I would say the housing market will reach its peak in the early to mid 20s. If you think of selling, wait if you can. The turning point could be towards 2025. The later 20s into early 30s could see a developing major international conflict, or war in which this country is attacked.

The Solar Eclipse at 00 degrees Scorpio falls exactly conjunction the natal Sun of Queen Elizabeth, and exactly conjunction the natal Moon of Prince Charles. It presages deaths in the royal family within 1 to 2 years. The progressed and directed charts of Prince Charles confirm this. We don't say who. The solar eclipse chart for the UK, putting Uranus in the 10th house square Pluto in the 6th, also shows sudden disruptions, or emergencies coming up with the probable defeat of the current Government within a year, unless extreme measures are taken. Huge sums of money are in danger of being lost. Poverty is a major issue in both UK and the EU.
Venus, in the solar eclipse chart, is in Via Combust Way, in her detriment, and in conjunction with the eclipse, therefore completely burnt out and powerless. In the UK chart, she rules the 11th house, meaning the Parliament. We can expect noticeable changes to come in this area.

The UK chart, being close to Bruxelles, this solar eclipse chart shows similar conditions, and changes to come to the Governance of the EU within 1 year.

In China the solar eclipse falls in the 1st house, with Venus ruling the 1st house. This reflects the serious discontentment and unrest of the people, especially in Hong Kong. It shows a great need for changes this coming year to mitigate more unsatisfactory conditions bound to develop. Jupiter is in the 10th house benefiting the ruling circle. But Jupiter is square Saturn in the 2nd house denoting a strong disparity between the wealthy and the poor of that country. This, and other economic considerations must be addressed.

The solar eclipse in the beginning of Scorpio traditionally presages war, bloodshed, treason, and treachery. Scorpio rules such places as Turkey, Judea (Israel), Syria, Algeria, Catalonia, and so on; and such cities as Washington DC, Baltimore; Liverpool, UK, and so on.