The lunar eclipse and winter solstice in astrology 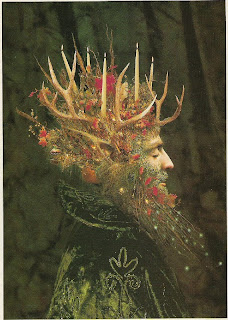 The lunar eclipse at 29:21 Gemini occured on December 21st at 8:18 AM GMT. And this was followed by the winter solstice, or Capricorn Ingress, on December 21st at 11:40 PM GMT, about 15 hours later. The affects of the eclipse will last through the three winter months.

The lunar eclipse is likely to send something of a shock through the world during the winter quarter.At 29 degrees Gemini it shows the people out of patience. 29 degrees is at the end of the tether, and is out of patience. This points to precipitous actions. 29 degrees also points to actions causing harm. Gemini is the road. Drive cautiously. Gemini is also the news. Rash and wrong reports will abound. A traditional interpretation of a lunar eclipse in the 3rd decanate of Gemini is that there will be a death of some illustrious and renowned person.

The outstanding aspects of the lunar eclipse are these: the eclipse is in opposition to Mercury. Mercury is retrograde and conjunct the Sun in Sagittarius. The lunar eclipse is also square to Jupiter and Uranus; Jupiter is in conjunction with Uranus in Pisces. At the same time we notice that Mars is in Capricorn and is applying to square Saturn in Libra. These energetic configurations are all tense. The eclipse Moon opposite retrograde Mercury in Sagittarius brings plenty of confusion. Be especially careful this winter when signing documents. Keep your papers in order, and be careful with money, credit cards and checks. Communications will tend to become confused and stressful at times. People will be prone to not keeping appointments, to not honor their agreements and to break their word, thus behaving dishonestly; beware of theft. Travel plans will also tend toward undesirable changes, confusions and mix ups, and travel will tend generally to be stressful, confusing and unproductive. The entire travel industry is in for a hard time these coming months. Reports in the news will be misleading and false. The eclipse Moon square Jupiter brings the likelihood of reckless optimism and gambling in the markets that will be followed by losses. The eclipse Moon square Jupiter also points to poor timing, disappointments in travel, confused communication and unfortunate court decisions. The matter of internet neutrality is currently being misrepresented, confused and fooled with. Tricksters are running rampant. The eclipse Moon square Uranus brings vexatious emergencies, disintegrating political relations, bad publicity, and rebellions against authority. Jupiter conjunct Uranus is a highly expansive force. Square the eclipse Moon, the Jupiter/Uranus conjunction spells trouble. Over expansion will bring loss. Watch the activities of the Fed, the banks and Wall Street. Mars applying to square Saturn points to serious conflicts. We note that in the winter solstice chart the Moon is at 8 degrees Cancer applying to close opposition to Mars and square to Saturn. The Mars square Saturn will be activated this winter for unconstructive behavior.

In the Johndro US Chart, the Johndro locality chart made for July 4, 1776, the lunar eclipse shows up in the 11th house square Jupiter and Uranus. Jupiter and Uranus are conjunct the 8th house cusp. And the eclipse Moon is opposite Mercury in the 5th house. This shows a damaged and damaging relationship between the Congress, the stock market, the Fed and the US financial relationship with foreign countries. We also notice that Saturn is in the 2nd house square Mars in the 6th house of this locality chart. This shows that serious expenses are coming in connection to military interests.

An interesting chart to look at is that of the winter solstice at Bruxelles, the financial capitol of the EU. The Sun at winter solstice was in opposition to the Mid-Heaven. The Mid Heaven, or MC, was at 29 degrees Gemini. The Ascendent was at 29 degrees Virgo, the Nadir was at 29 Sagittarius and the Descendent was at 29 Pisces. The angles of the Bruxelles are all exactly conjunct, square and in opposition to the lunar eclipse. This means that the lunar eclipse is going have the affect of shaking up the EU due to its involvement with the Fed and the Wall Street banks. They're juggling too much. In the winter solstice chart we find the Moon in the 10th house opposite Mars in the 4th house and square Saturn in the 1st. There is serious opposition and conflict against Bruxelles coming from the people of Europe. The machinations of Bruxelles will be affected by all the social unrest. It is probable that the organization in Bruxelles will undergo a very significant change this winter. With the Sun in opposition to the solstice point of the eclipse the affairs of Bruxelles are at a turning point this winter. All of Europe is being affected.

The winter solstice chart for Washington DC has Mercury, the Sun, Pluto and Mars in the 6th house. The Moon is in the 12th house opposite Mars and square Saturn in the 4th house. This shows serious problems in the areas of public health, public services, the police, the fire departments, the military, real estate and housing, and prisons. Mars afflicted in the 6th house points to illness. Mars square Saturn in Libra shows that illness comes through social interaction; it is airborne. Mars in the 6th house also points to distress among the poor. Moon coming to opposition Mars brings out crime. All the while with Mercury, Sun, the North Lunar Node, Pluto and Mars in the 6th house there is sure to be an increase in expenditures for military activity this winter.

The winter solstice chart for North and South Korea as well as for China has Mars in the first house in opposition to the Moon and square Saturn in the 10th house. This brings out arguing and fighting between the Koreas. China is in a bad mood, not necessarily with the Koreas, but that is also possible. Mars in the first house brings out anger among the people over there. The outlook is angry. There may be strikes, riots, fires, crimes committed and outbreak of illness. The outlook is aggressive. Moon conjunct the 7th house and opposite Mars causes trouble in international relations. The two Koreas will be quarreling and making a general nuisance of themselves. A lot of ugly words will be flying back and forth betwixt and between them. In the winter solstice charts for the Koreas as well as for China we see Saturn afflicted in the 9th house. This shows disasters to ocean vessels with many deaths. There may be another attack on a ship. Saturn afflicted in the 9th house also ties into the Korean conflict problems in international trade. In the chart for China Saturn afflicted in the 9th house points to serious trouble with trade relations with the west through this winter. Saturn is in Libra. Libra is the west.

The eclipse and winter solstice charts for Canada pretty much parallel those for the USA, so much of what is indicated for the US is also true for Canada.

The eclipse chart for Mexico shows trouble in international trade relations and trouble with Mexico's neighbors, especially further south. There is trouble brewing behind the scenes with plenty of dangerous criminal activity. The government is plagued. The winter solstice chart has Mars afflicted in the 7th house. Mercury, Sun, the North Node, Pluto and Mars are all in the 7th house. Complex trouble in international relations is indicated. Moon is in the 1st house showing unrest, discontent and ill health among the people. Moon square Saturn in the 4th house shows the people suffering because of the government's weaknesses; the government is being hard pressed by international criminal activity. With Mars in the 7th house it is possible that there will be an increase in fighting. Mars in the 7th house shows danger of war. Mars is in Capricorn. This means that more drug gang activity will be coming up into Mexico from Central and South America. Mexico is at war.

Raphael is available for private astrological and psychic consultations. To find out more about Raphael's work visit www.psychicarts.net.

Also, Raphael's best seller book, Feng Shui Step by Step, has just been reprinted. To see it and to order a copy go to Amazon.com or to order a copy directly go to www.createspace.com/3472024. This book makes a great gift.
Posted by Raphael at 7:54 PM