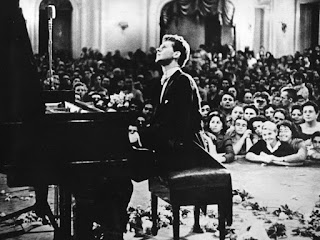 The great American pianist Van Cliburn died of bone cancer on February 27, 2013 at age 78. He was born at the new moon of July 12, 1934 at 11:45 AM. The Chinese astrological signs at the date and time of his birth are as follows. The year was Wood Dog, the month was Metal Sheep, the day was Wood Monkey, and the hour was Metal Horse. This shows Van Cliburn to have been a very hard working, ambitious, clever personality with high aspirations. As shown by his birth stars, Cliburn was a sanguine personality, and believed that his work was of benefit to the whole world, and, considering that his winning of the Tschaikovsky piano competition in Moscow in 1958 signaled a turning of the tide in US/Soviet relations, his work was, indeed, of benefit to the world. Capable of great vision and humanitarian works, Cliburn's artistic and humanitarian achievements also won him the US Medal of Freedom in 2003, and the Order of Friendship of the Russian Federation in 2004.

The balance of elements in Cliburn's chart is 4 Fires, 4 Earths, 4 Metals, 1 Water, and 3 Woods. Water is extremely weak. Water rules bones. Cliburn's Vital Element was Metal; Metal protects Water. Metal in Cliburn's chart was very strong from birth all the way up to age 39. Between 39 and 69 Water became vulnerable, but was strong enough to carry him through. But from age 69 to 79, most noticibly from 74 to 79 Water was totally exhausted, and it was in this period that Cliburn contracted the cancer that ended his life. The age cycle of 69 to 79 has very strong Earth, Wood, and Fire, all which combine to kill Water, in other words, Cliburn's bones. This year, 2013, the year of Cliburn's death, is the year of Snake. Snake in Cliburn's chart is his death star. Had Cliburn not gotten this cancer, his death star would have come up at age 99. If this situation were looked at in the light of traditional fenghui, it would show that to have prevented his death in this period of his life, it would have been recommended that he move to a cold, dry climate at age 69. Cliburn was living in a hot, humid climate. Hot and humid exhausts Water element. Water element is cold. Metal, which protects Water is mountain air. Had he moved to a place like Switzerland or to Colorado, and had proper care earlier, he would have been able to live longer. Cliburn's chart shows strong Metal emerging again at age 89. Metal is what protected his life.

With Metal so strong up to age 39 Cliburn rose to meteoric fame in his early 20s. In 1958 at age 23 he won the Tschaikovsky competition. 1958 was the year of Earth Dog. It shows a huge gain for Cliburn. In 1962 at age 28 Cliburn set up the Van Cliburn International Music Competition. 1962 was the year of Water Tiger. Tiger for Cliburn is traveling star. It signifies a major development and change in his career.

In 2012 Cliburn performed his last concert, and was diagnosed with advanced bone cancer. The year 2012 was Water Dragon. Dragon is called the grave of Water.

Had his cancer been discovered and stopped earlier, and the right precautions been taken, Cliburn would have reached his life's pinnacle at age 79 to 89. The Chinese astrological chart shows his illness starting at or right after age 69. It was not diagnosed until he was already 77.

To read articles such as this in Chinese astrology and fengshui click on the join button at the upper right of this article.

Raphael is available for personal Chinese astrological readings and consultations in fengshui. To find out more visit www.trs-fengshui.com.

Raphael's book Feng Shui Step by Step is reprinted and available at Amazon, and at www.createspace.com/3472024.
Posted by Raphael Simons at 3:13 PM No comments: 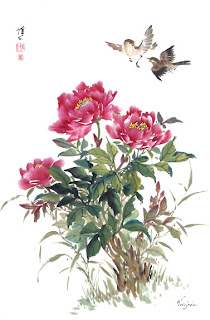 While the Chinese lunar new year begins at the second new moon after winter solstice, which, this year, is on February 10, the solar year always begins exactly midway between the winter solstice and the spring equinox. It corresponds in western astrology with 15 degrees Aquarius, and usually falls on February 4. The Chinese solar new year always marks the beginning of Chinese spring season.

In Chinese astrology the solar years and months are always marked in the 9 star system. The 9 stars are called 1 Water, 2 Earth, 3 Wood, 4 Wood, 5 Earth, 6 Metal, 7 Metal, 8 Earth, and 9 Fire. This year, 2013 is the year of 5 Earth. The nature of 5 Earth is to establish perfect balance. In the year of 5 Earth all of the stars return to their original houses, 1 Water star returning to house of 1 Water, 2 Earth to the house of 2 Earth, and so on. This means that all of the elements in this year are back home, and we are at the beginning of a new nine year cycle. All of the forces in Nature are now returning to their original harmony.

The 9 star system is the oldest Chinese astrological system, said to have been discovered by the first king of China, Fu Hsi, about five-thousand years ago. The 9 star system was based originally on observations of the stars in the Big Dipper, the North Star and the star Wega made at regular intervals, and was used as a calendar for agricultural purposes. It also found its way into the Chinese compass systems used in fengshui as seen in fengshui compasses made during the Han dynasty over two thousand years ago. By the Han dynasty this was already known to be a very ancient system.

The 9 Star system came to be linked with the Eight Immortals and realm of the Jade Emperor. The correspondences are as follows.

1 Water Star corresponds with Chang Kuo-Lao, a recluse who has, and can grant magical powers including the power of invisibility. He travels on a mule that takes him great distances, and when not needed the mule is folded up and put away in a wallet. When Chang wants to ride the mule again, he puts water on it and it returns to its original form. Chang always rides his mule backwards.

2 Earth Star corresponds with Ho Hsien-Ku, a lady who, having eaten a supernatural peach, became a fairy. She loves to wander alone in the mountains, and lives on powdered mother of pearl and moonbeams. She brings harmony and joy to people's homes.

3 Wood Star corresponds to Chung-Li Ch'uan, the chief of the immortals who keeps the alchenical secrets of the elixir of life and the powder of transformation. He is depicted as a fat man with a bare belly. He holds a peach and a fan with which he revives the souls of the dead.

4 Wood Star corresponds to Han Hsiang-Tzu, a famous scholar who has the power to make flowers grow and blossom instantly. His emblem is a flute, and he is the patron of musicians. He does not care about money, and, if given any, scatters it on the ground.

6 Metal Star corresponds to Lan Ts'ai-Ho, a woman who wears a blue gown, with one foot shod and the other foot bare, waving a wand and begging in the streets. She sings a song about the fleeting delusions and vanities of this life. She carries a flower basket, and is the patron of gardners and florists.

7 Metal Star corresponds to Lu Tung-Pin, a scholar and recluse. He overcame ten temptations for which he won a sword of supernatural power with which he traveled the earth for 400 years slaying dragons, freeing the world of evil spirits, and healing diseases. He is worshipped by the sick.

8 Earth Star corresponds to Ts'ao Kuo Chiu, a nephew of the empress Ts'ao Hou of the Sung dynasty. Ts'ao Kuo Chiu appears in court costume and holds castinets. He is the patron of the theatrical arts.

9 Fire Star corresponds to Li T'ieh-Kuai, a beggar leaning on an iron staff, carrying a beggar's gourd in which there is a scroll that is flying out and away. Li T'ieh-Kuai is a powerful magician who has the ablity to leave his body and fly into the heavens. His emblem is a pilgrim's gourd, and he is sometimes represented riding on a crab, or accompanying a deer. He brings great luck and prosperity.

If you don't know your birth star, here is how to find it. The cycle of the nine stars repeats every nine years. The stars for men and women are opposite and complementary, the Taoist understanding being that women and men are mirrors of one another. Find your year star either by adding or subtracting 9 or multiples of 9 to or from your birth year until you come to one of the following.

The beginning of the solar new year can be reduced to an I Ching hexagram to tell us something about what the year means. Using the year, month, day and hour of the beginning of the solar year this year, we get Hexagram 11. Hexagram 11 is called Peace. Small things are fading away, great things are coming. Great profits can be made on small investments. This hexagram is very fortunate when it comes in the spring, and this is the beginning of spring. The line in the hexagram given by our computation is the 5th line. It says "The emperor gives his daughter in marriage. Good fortune." The meaning is "to rule is to serve." Carry out what is right in a simple manner and you will enjoy good fortune.

To follow articles in Chinese and western astrology click the join button at the upper right of this article.

Raphael is available for personal readings in Chinese astrology, and fengshui. To find out more visit www.trs-fengshui.com

Posted by Raphael Simons at 9:32 PM No comments: