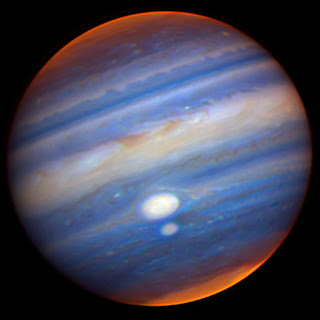 Jupiter entered Virgo at 12:12 PM GMD on August 11. Jupiter remains in Virgo until September, 2016. Not that it is terribly evil, but Virgo is the sign of Jupiter's detriment. Wherever Jupiter is, we find increase. Virgo rules details. Jupiter increases the details in everything where, as the proverb goes, we are sure to find the devil. Jupiter is best at getting the all-inclusive bird's eye view which makes him the Philosopher's planet. In Virgo, however, this doesn't happen very easily. But, since Jupiter is the great benefic, we can also expect some good to come.

Virgo rules the following: foods, clothing, and medicine, chemicals, animals in general, bees, dairies, the armed services, civil services, the police, labor, employment and employees, farms and farming, crafts, industries, teachers, critics, editors, libraries and information, scientists, mathematicians, diseases in general, public health, doctors and nurses, life saving services, charitable and humane societies.
Jupiter in Virgo will magnify these areas. For example, we may see more effort being made to address the problems of world hunger; we may see important medical breakthroughs; the issues of chemical poisoning of the air and land will come more into the consciousness of the people; the issues of bee die offs will gain more notice; and the internet will see greater and greater development with more and more information being made available. On the down side we will see an increase in big agro, big pharma, GMOs, with corrupted science, misleading information, and so on. When Jupiter entered Virgo he was applying to opposition Neptune in Pisces. This is a sign of poisoning, criminality, and treachery. Be careful about food contamination, bad medicines, mislabeled products.

Countries under Virgo include Syria, Turkey, Iraq, Kurdestan, Greece, Egypt, Switzerland, Brazil, Uruguay.
Major cities under Virgo include Paris, Jerusalem, Los Angeles, Boston.
According to Jupiter we should hope to see some improvements coming to these places, notwithstanding the corruption that Jupiter's afflicted condition will bring.

The main aspects to and from Jupiter upon entering Virgo were the following:
Mercury was separating from conjunction with Jupiter, with both Mercury and Jupiter applying to opposition Neptune in Pisces. This multiplies details and makes for lots of confusion which will be used by criminal elements to take unfair advantage of the disturbed political and economic mess the world is in this year. This will set a tone for the developing political debates in the US. Jupiter will have entered Libra for justice by the time of the elections.
Jupiter was semi-square the Moon when he entered Virgo, the Moon applying to opposition Pluto. This increases underground criminal activity. We can expect, especially since Virgo rules Turkey, Syria, and Iraq, an increase in terrorist activity in that region with more destruction to world heritage sites, not to mention the massacres of innocent people. We can also expect more terrorism to develop in France, namely Paris, and possibly Toulouse and  Lyons, all ruled by Virgo. The agitation in Jerusalem will also increase through this year of Jupiter's passing through Virgo.
Jupiter was also sesquisquare Pluto in Capricorn, and sesquisquare Uranus in Aries. This aspect is sometimes called Thor's Hammer. In a nutshell it denotes violence. The forces in the world, having to do with corporate power, political power, extreme wealth, the poor, public services, food, medicine, geo engineering, and so on, are in great tension.

To follow this blog click the join button at the upper right of this article.
Posted by Raphael Simons at 3:23 PM No comments: