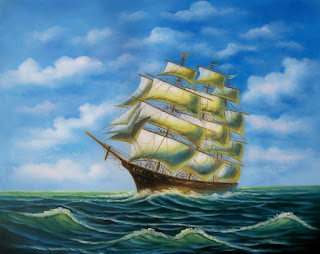 In the 9 Star astrological system used in feng shui there is a method that is used to determine the best directions and the best times to move house, as well as to do construction on a house. While this method is elaborate, and requires in-depth knowledge of the 9 Star system, it can be used to advantage following its basic outlines as presented here.

The first thing to determine is the star number of your year of birth. There are 9 star numbers. As these repeat cyclically you can find your birth star number from the basic set presented below by adding or subtracting 9 or multiples of 9 to or from the years as shown. You may notice how there are different birth star numbers for males and females born on the same year. Chinese astrology sees males and females as mirrors of one another. Using the year 1950 as our starting point we have the following.

If you move on a year chart pattern, the luck of the move begins to manifest after five years, and lasts sixty years. If you plan to move for a period shorter than five years, you would look at a month chart  for more precision.

Moves made in inauspicious times and directions are not necessarily unlucky, but bring challenges that may be used to advantage. The exact meaning of these challenges depends on interpreting the complex relationships of the star numbers with the elements they represent and the meanings of the directional houses in which they are found. When the 9 star system is expertly used, moves can be planned in the directions of lucky stars for increased prosperity and good fortune, and in the directions of stars that improve your health.

Raphael's best selling book Feng Shui Step by Step is now reprinted and available at Amazon.com and at www.createspace.com/3472024
Posted by Raphael Simons at 8:03 PM 4 comments:

The solar eclipse in Gemini

The solar eclipse in Gemini happens at midnight GMT on May 21st. It is visible from Thailand to New Mexico, across the Pacific and pulling on the Ring of Fire including southern China, Japan, and the west coast of the US. Earthquake activity may follow this event. In light of the fragile condition of Fukushima, and that this eclipse is visible over Japan, we have cause for concern.

A solar eclipse in the 1st decanate of Gemini is said to arouse dissention and strife in the world, especially among clergy and in religious circles. It also causes hatred, and contempt for law.

To clear up the confusion currently circulating about this eclipse, the eclipse cycle is 19 years. That means that every 19 years an eclipse happens in the same place. In other words,19 years ago there was a solar eclipse at 00 Gemini just like there is a eclipse at 00 Gemini today.
The eclipse is not in a precise alignment with the Pleaides. Pleaides is in Taurus. The eclipse is in Gemini. The distance between the eclipse and the Pleaides is over 2 degrees, which, when translated into miles, equals light years considering the distance of the Sun to those stars.
This eclipse does not represent an event that happens once every 26,000 years. The 26,000 years is an approximate number for the precession of equinoxes. The fixed stars appear to move backwards against the Zodiac approximately 50" a year.

If we read the eclipse as being in conjunction with the Pleaides, we have to see that the violence denoted by the 1st decanate of Gemini is only exacerbated by the Pleaides. Sun and Moon on Pleaides is traditionally linked with blindness, physical and spiritual, and violence.

An outstanding aspect from the eclipse is its square to Neptune. Perhaps this accounts for the fantastic confusion now circulating about this event. At any rate, the eclipse square Neptune is spreading in the world a strong discontentment amongst the poor against the wealthy, unrelenting powers of imperialism.

We also see the square aspect between Uranus and Pluto coming into focus, Uranus now at 7 degrees Aries, and Pluto at 9 degrees Capricorn. This shows the growing tension between large corporate, financial and political organizations and challenging forces; the structures will not hold up due to underground criminality in the circles of world power. Pluto will play a strong role in the coming months in the situation of the Eurozone, the UK, and Washington DC. The square of Uranus and Pluto reaches exact in June, next month, at 8 degrees Aries and Capricorn, resp. This square aspect will register very strongly through the summer months, as shown in the Summer Solstice chart. The situation in the world is going to heat up through the summer and fall months.
Even more significantly, the square of Uranus and Pluto will reach exact again in April, 2014 at 13 degrees Aries and Capricorn. 13 degrees Aries and Capricorn are critical degrees; this means the world situation will be in deeper crisis that year than it is this year. Also note that in April, 2014, when Uranus and Pluto are exactly square in critical degrees, there will be two eclipses. Crisis conditions will last through 2014 and 2015.

Today's eclipse is in exact sextile with the Vernal Equinox (the Sun at 00 Aries, March 20th). This is a very good aspect. It will open up opportunities for communication and greater cooperation in face of the difficulties the world is facing.

To follow articles such as this in mundane astrology, click the join button at the upper right of this column.

As noted in an article in Der Spiegel (http://www.spiegel.de/international/europe/greece-to-hold-new-election-in-june-after-coalition-talks-collapse-a-833373.html)  new elections will be held in Greece, probably on June 17th. The lunation chart prior to the election was drawn up to see what is unfolding. The lunation prior to the election is the lunar eclipse of June 4th. The eclipse at Athens is at 1:04 EET.

The lunar eclipse is at 14 degrees Sagittarius in the 3rd house opposite the Sun in the 9th house in Athens. This eclipses international relations; Greece is not about to conform to the expectations of the EU.

The important significators for the outcome are Saturn and Jupiter. Saturn is at 23 degrees Libra in the 2nd house exactly trine Mercury at 23 degrees Gemini in the 10th house; Mercury rules the 10th house. Jupiter is at 28 degrees Taurus in the 9th house conjunct the Pleiades. The chart favors the working class and the poor, as shown by Saturn, over the conservative and wealthy international class, as shown by Jupiter. Jupiter conjunct Pleiades spells trouble; it gives the conservative Eurocrats something to grieve about. Mercury in the 10th house trine Saturn in the 2nd shows the Government of Greece coming around to the people. It is only a matter of time before Greece defaults. The time for that, if not sooner, will be toward the end of this year.

Saturn in the eclipse chart is exactly conjunct the natal position of Greece's Uranus. Mercury is also trine that position of Uranus. Uranus in the natal chart of Greece (July 24, 1974 at 4:00 EET) is in the 4th house. The Government is changing radically in face of popular opposition to the austerity measures.

Jupiter in the eclipse chart is exactly square the natal position of Greece's Mars. Mars in the natal chart is in the 2nd house. This shows huge losses that cannot be prevented, much to the dismay of the international community. Greece is in revolt. The election will not favor the EU.

To follow articles in mundane astrology such as this, click on the join button at the upper right of this column.

Raphael is available for private astrological and psychic readings. To find out more about Raphael's work visit www.raphaelsimons.com.
Posted by Raphael Simons at 1:59 PM No comments:

What the full moon of May 6th shows

The full moon occurs on May 6th at 3:36, GMT. May 6th is Super Sunday, a day of key elections in Greece, France, and Germany. Planets showing general political trends are Jupiter and Saturn.

Jupiter, representing the wealthier, more conservative forces, is peregrine, combust, in a critical degree, and opposite the Moon, thus in a fairly weakened condition. Moon opposite Jupiter shows that the position held by the conservative economic forces is approaching a turning point.
Saturn, representing the poorer people, and the working classes, is exalted, yet retrograde; opposite Mercury and trine Venus. Saturn is in a somewhat stronger position than Jupiter.
Saturn and Jupiter are in a quincunx aspect, showing that adjustments must be made. Status quo is going to change.

Using Geodetic equivalents, Mercury is at the zenith of Athens opposite Saturn at the nadir. This shows severe disagreement between the people and the Government. No option is going to work now. The election is going to bring out more despair.
Looking at the national chart of Greece, Saturn in the full moon chart is conjunct Greece's natal Uranus in the 4th house. The discontentment is being galvanized. The trouble connects to foreign involvements. Uranus rules Greece's 9th house. Nothing offered at this election will resolve the crisis in Greece.

Looking at the national chart of France, the Sun and full Moon form squares with France's natal Uranus at 15 degrees Leo. This stresses the economic crisis in France. Neptune in the full moon chart is at 2 degrees Pisces, exactly square France's Mars. Mars rules the Mid-heaven of France's national chart. This presents a major threat to the current Government. Transiting Neptune is also opposite France's Pluto. The country is deeply discontent.

The current changes in Europe will weaken and compromise Frau Merkel's position in Europe. It may take another year to completely undo her Government. Using geodetic equivalents Uranus comes to the zenith at Berlin in two years, or April 2014. Germany will undergo some deep changes up to and through that time.

To follow articles such as this in mundane astrology, click on the join button at the upper right had side of this article.

If you have questions about your personal and business plans and affairs, Raphael is available for personal astrological and psychic readings. To find out more about Raphael's services visit www.raphaelsimons.com.

Posted by Raphael Simons at 4:11 PM No comments: