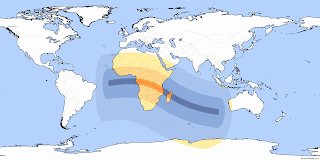 The solar eclipse of Sept. 1 comes at 10:19 AM GMD. It is at 9 degrees Virgo, forming a tight T-square with Saturn and Mars in Sagittarius, and Neptune in Pisces.

A solar eclipse in the first decanate of Virgo is read as causing great calamity, and death of some head of state, or king. Countries and regions of interest, ruled by Virgo, include Turkey, Syria, Iraq, Kurdestan; also Switzerland, the West Indies, Crete, Croatia, Greece, and Brazil. Cities under Virgo include Jerusalem, Paris, Lyons, Toulouse, Strasburg, Boston, and Los Angeles.
The eclipse is visible through central Africa. It spells calamitous conditions for that region.

Current news about the difficulties that the Deutsche Bank is also shown in the eclipse. The original birth chart of Deutsch Bank, first founded as an international commerce bank on January 22, 1870 in Berlin, has Venus 10:27 in Pisces in the 1st house; Neptune 16:57 in the 1st house; Jupiter 11:29 Taurus in the 2nd house, and Pluto, ruler of the 9th house of internation trade in the 2nd house conjunct Jupiter. Deutche Bank is extremaly rich and powerful, but, at this point is in considerable hot water. The important planet to note here is Venus. The bank's natal Venus is at 10:27 Pisces. We see transiting Neptune now at 10:40 Pisces retrograde. Venus, in the original chart, rules the 8th house of debts, credit and derivatives. Neptune shows a bubble in credit and derivative, and fradulent manipulation. Neptune currently retrograde promisses more woes to come to Deutche Bank through this year and well into 2017. The eclipse is almost exactly opposite Neptune conjunct the bank's natal Venus, showing how much danger it is in. This is exacerbated by the square aspect to Saturn and Mars. In the eclipse chart for Berlin Mars and Saturn are in the 2nd house showing an extremely dangerous financial condition.  It threatens Germany. If this is not strictly controlled by the German government it will cause an economic crisis not only in Germany, but in all of Europe and so on. It is interesting to note: Deutsche Bank's natal Saturn is at 24:19 Sagittarius. Saturn will be at 24 degrees Sagittarius in early February, 2017. This means that the bank is coming to a Saturn return in early February, 2017, and will be involved in a process of reorganization with probable streamlining, meaning losses of jobs.
The eclipse happens at the zenith of Berlin. Neptune is in the 4th house, and Mars and Saturn are in the 2nd house. This shows growing chaos in Germany, not to mention Europe. There is increasing opposition to the current government that will ultimately fall from power.

The eclipse in Ankara, Turkey, Turkey being ruled by Virgo, is in the 10th house. Mars and Saturn are in the 1st house. This is very bad for the government except that Jupiter is also in the 10th house, and gives protection. It, nonetheless, spells war.

The eclipse in Moscow is in the 10th house along with north node, Jupiter, Mercury, and Venus. And Saturn and Mars are in the 1st house. There is a tremendous activity in the top levels of the government, and the outlook is warlike. Because the eclipse is at the zenith at these longitudes of the world, we can expect the violence there to intensify. Russia will be all the more directly involved in the conflict in Syria, as will Turkey. The situation for Assad is extremely dangerous. The war in Syria will get worse. Assad is in serious danger.

The eclipse in London is similar to Bruxelles. It shows danger for the banks and stock market, and difficulties in diplomatic relations connected to Parliament. The eclipse opposite Neptune spells a split with EU, but with lingering questions unresolved.

The eclipse in Washington DC is in the 1st house opposite Neptune in the 7th and square Saturn and Mars in the 4th, showing general unrest, ill health, and discontentment among the people. In the 2nd house, however, we find Jupiter conjunct Mercury in Virgo, and conjunct Venus in Libra. This shows good and improving economic conditions.

Raphael is available for personal astrological consultations. For information, visit  www.raphaelsimons.com
Posted by Raphael Simons at 4:45 PM No comments: