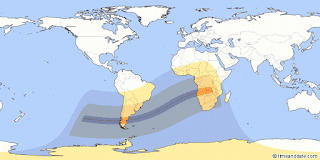 The solar eclipse of 2/26 has some interesting aspects. There is a stellium of Mercury, the eclipsed Sun and Moon, and Neptune, all in conjunction. Then there is a configuration of Mars conjunct Uranus, opposite Jupiter, square Pluto, and trine Saturn. This is a very malefic picture.

The eclipse was not visible in the northern hemisphere, so it acts more like a strong lunation. But, it was visible  across the southern part of South America, and across into Africa where it's effects will be more directly felt. There will probably be an earthquake in Argentina or Chile, as shown by the map of the eclipse path.

A solar eclipse in the 1st decanate of Pisces is unfortunate for the sea-coast. This one was at 8 degrees Pisces. It could point to danger of a tsunami.


Posted by Raphael Simons at 1:06 PM No comments: