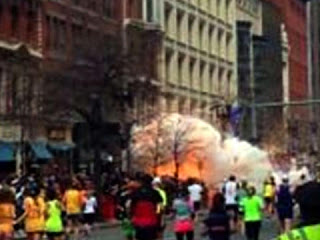 A chart (using the Koch house system) made for this unfortunate event in Boston 2:50 PM EDT, April15, 2013 shows the following. Mercury, Uranus, Sun and Mars were in Aries in the 8th house, and the Moon was in Gemini, intercepted in the 10th.

The event was deliberate (the Moon was applying the sextile the Sun, ruler of the 12th house).
The Moon waxing tells us that the activity will gain impetus, registering more and more to slowly complete activity in the matter in hand. There is a great deal of investigation going on.

The Moon was between Jupiter and Saturn, showing that a well-intentioned act in the past falls short now. The party involved appears to have split off from a larger group in order to take independent radical action, probably an alien. There is defiance in it appearing to come from behind the scenes arguments, vexatious developments, disobedience, a break, and rash actions.

The Moon in the last decanate of Gemini says that the action, while sudden, was long planned, and long thought out.

The Moon in the 10th house and intercepted shows a public event, but triggered in secrecy from within a room or vehicle or enclosure nearby. It may have been triggered from a cell phone.

The Moon in the Aquarian decanate of Gemini shows someone taking radical action, or a radical, anarchistic, rebellious, eccentric, extremist type taking action. It shows change without notice that is disruptive and political. Whoever did this appears to have taken advantage of the bomb drill happening that day.

The nature of the event is shown by the Sun. The Sun in the 8th house, ruling the 12th shows large scale damage, involving deaths and injuries, and involving investigations. It also may point to public moneys, books under examination, bankruptcy and financial losses.

The stellium of Mercury, Uranus, Sun, Mars in Aries in the 8th house is extremely violent. Sun conjunct Mars in Aries is deadly. There is much to question in this event. It is not wise to jump to conclusions and use the event to promote a pet theory. Something very underhanded,  secretive and criminal appears to be involved in  it. There are those who will use this event opportunistically to push their political agendas.

Posted by Raphael Simons at 12:50 PM No comments:

The Aries new moon in astrology 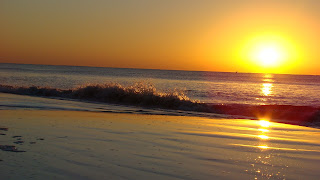 The new moon in Aries occured April 10 at 10:36 AM GMD at 20 degrees 41 minutes Aries. We had a stellium of Uranus, Sun, Moon, Mars, and Venus in Aries, with the Sun, Moon, Mars, and Venus in conjunction, producing a tremendous force that works both creatively and destructively. Sun, Moon and Mars together, in Aries, is brilliant, and shows little patience. The conjunction with Venus does little to temper it. Mars with Sun is extremely hot; there will be some violent storms. 20 degrees Aries is in the 2nd lunar mansion, producing enmity, courage, recklessness, and ambition. This month will be marked by dramatic events. The stellium of Uranus, Sun, Moon, Mars, and Venus in Aries points to countries ruled by Aries, namely UK, Germany, (France), Poland, Israel, Palestine, Syria, Japan, and in the United States the mid-Atlantic region. The Stellium in Aries strongly favors taking intelligent action. Six planets in cardinal fire is potentially violent.

The new moon in the UK occurred in the 11th house. There will be heated debates in Parliament. The ruling party is at odds with Labor.

The new moon in Bruxelles, affecting the situation in the EU occurred in the 10th house. We have in the 10th house Mercury, Uranus, Sun, Moon, and Mars. There will be heated arguments in top circles of Government in Europe. Mars warns of violence, and possible military or police activity. There will be much trouble in Government, and the possible death or removal of a notable figure. Europe is in turmoil.

The place where the new moon is most interesting, however, is in east Asia. In North and South Korea, and in China the new moon was in the 7th house with Mars. This is a warning that the situation around North Korea, unless checked, will heat up dangerously. The charts of North and South Korea have the Sun, Moon, Mars, and Venus in the 7th house. Mars rules the 7th house, and Venus rules the 1st in both charts; Venus and Mars conjunct and applying to parallel one another. This points to the danger of conflict. The chart of China has Uranus on the 7th house with Uranus, the Sun, Moon, Mars and Venus in the 7th house. China cannot help but become involved in an emergency if this continues. Uranus conjunct the 7th house cusp denotes an unexpected emergency in foreign affairs, causing agitation in the country. Uranus is square Pluto in the 4th house of the Chinese chart. This is potentially very troubling for China. The stellium of Uranus, Sun, Moon, Mars, and Venus are in the 6th house of the Japanese chart. If conflict erupts on the Korean peninsula there will be trouble in Japan as well; Uranus and Mars in the 6th house denote explosions and accidents. Uranus is square Pluto in the 3rd house denoting trouble in the neighboring territory. The situation in the far east is very delicate. The Ascendant of Japan is at 26 degrees Libra, a critical degree. If trouble breaks out in Korea it will be experienced as a crisis in Japan.

To read articles such as this in mundane astrology click the join button at the upper right of this column.

Raphael is available for personal astrological readings. If you have questions and wish to find out more visit www.raphaelsimons.com.
Posted by Raphael Simons at 8:13 PM No comments: