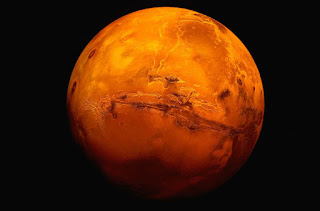 Mars entered Scorpio on January 3 at 2:34 PM GMT and will be in Scorpio until March 6, when he enters Sagittarius.
Mars is at home, and strong in Scorpio. In the ancient book, The Sephir Yetzirah, Mars is said to be wise in Scorpio. As shown by the planetary aspects at the time he entered Scorpio, Mars' wisdom is best understood now as cunning.
The aspects were as follows.
1. Mars was square Mercury, with the Moon applying to conjunction Mars and square Mercury (soon to turn retrograde).
2. The Sun was applying to conjunction Pluto square Uranus.
3. Venus was applying to square Neptune and conjunction Saturn.
In a nutshell, these are destructive, evil, violent aspects with no small degree of treachery. At a glance we can anticipate more strife, terrorism, trickery, and lying. In the context of the more sanguine winter solstice charts, these prognostications should be softened to some degree; it could be worse.

1. The Moon applying to conjunction Mars square Mercury, with Mercury about to turn retrograde, shows a war of words, and threats that are not kept. One example: Obama's executive action about the guns will not amount to much. Another: the situation in Oregon is misrepresented by the media and Feds. It is an ugly distraction; watch for other sly moves in the making these coming days. Another example: the sword rattling between Iran and the Saudis won't get too far - yet, but will fester. Don't get upset for the wrong reasons. We can expect lots of terrorism not only in violent events, but through media. These are dangerous days. The demons feed on your fear.
Another reading of Mars square Mercury is theft. On a worldwide level this could have huge implications.

2. The Sun applying to conjunction Pluto square Uranus points to violent upsets and fighting in the world.

3. Venus square Neptune points to scandals, social unrest, and financial fraud. Venus in conjunction with Saturn shows financial losses, problems with banks, and depreciation of stocks. It also points to mistreatment of women.

Mars in Scorpio points to places ruled, at least in part, by Scorpio. Trouble spots in the world may include Turkey, Syria, Algeria, Judea, Morocco, Norway, Catalonia, and so on. Cities that come under Scorpio include Washington DC, Baltimore, Milwaukee, Cincinnati, New Orleans, and so on.

The charts for the UK, EU, US, and China all have Mars in succeedent houses, meaning the world economy is being affected by this strife. Economic conditions will fluctuate. The markets are unstable and apt to gyrate.

The chart for the US has Uranus in the 2nd house, Moon and Mars in the 8th, and Sun and Pluto in the 11th. This shows harsh financial conditions - sudden losses. Saturn is in the 10th house square Neptune in the 1st house. The President looks bad to the people. Saturn afflicted in the 10th house shows misfortune to people in positions of authority. The people of this country are discontent.
Venus is conjunct the MC in the US chart, and, square Neptune in the 1st house, shows a powerful woman subject to scandal, and disrespect.

The chart for Tehran has Moon and Mars in the 4th house with Mercury in the 7th. This shows possible fires in public buildings, earthquakes, and troubles for the government, especially since Uranus is in the 10th house square Pluto and Sun. The square of Moon and Mars to Mercury in the 7th house shows double dealing and breaking of agreements with foreign powers, diplomatic troubles, international trade disputes, and disagreements in international affairs.

The chart for Moscow is similar to that of Tehran, but has Uranus in interception in the 10th house. This points to someone very influential, and very high up in an inner, secret, circle of the Government possibly being cut out or dying.