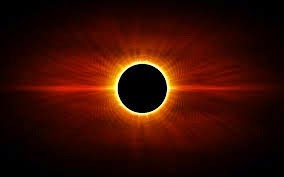 The solar eclipse and vernal equinox happened on 3/20/15 at 10:18 AM GMT and 3/20/15 at 10:46 PM GMT, respectively. Approximately 12 hours apart, they work through polarities; the eclipse and equinox in the zenith and nadir of the UK and Europe, and in the eastern and western horizons, or Ascendant and Descendant, of the Americas.
The eclipse was visible all across the northern Atlantic, Europe, especially northern Europe, and into central Asia. It was not visible in North America. The effects of the eclipse will be felt most strongly in Europe and eastward periodically throughout the year, whereas in the US the effect is more like a strong new moon.
An eclipse in the zenith, and it is in the zenith of all the countries in Europe and east through central Asia, spells trouble to the Governments of the UK, the EU, Russia, and the middle east. An eclipse in the zenith also presages deaths to a major head, or heads of state. An eclipse in the zenith also spells potential disaster in political affairs as well as in nature. The effects are generally strongest in the 1st year, but can run on through 3 years.
An eclipse in the Ascendant, as shown in the chart of Washington DC, shows unrest and discontent, and poor health among the people.

The eclipse is at 29 Degrees Pisces. When such a strong event occurs at 29 degrees any sign it means a weeping matter soon to happen in the world. A solar eclipse at the end of Pisces shows sedition, cruelty, and inhumanity of soldiers. There will be a surge of crime and terrorist activity in Europe, the Middle East, and in Russia. Some horrible events will happen.

The eclipse being in Pisces affects countries, regions, institutions, and other areas of interest ruled by Pisces. These include North Africa; Egypt; Europe as a whole, especially western France, Portugal, and Scandinavia; the Mediterranean and its small islands, especially around Greece; and South Asia. It includes religion and religious fanaticism. It also includes chemicals in the air and water, And it includes all of sea life. Fish die offs are highly likely, all things considered.

The solar eclipse chart in Washington DC has Neptune, Mercury, Sun, Moon, and Uranus in the 1st house. Mars and Venus are in the 2nd house. There is tremendous emphasis placed on public discontentment focusing on money.
The vernal equinox chart in Washington has Sun, Moon, and Uranus in the 7th house with Mars and Venus in the 8th. It emphasizes international relations and trade focusing on financial issues. Moon in the 7th house in Aries is in grand trine with Jupiter in Leo in the 11th house and Saturn in Sagittarius in the 3rd. Again, this is highly expansive. It may very well be pointing to the intention to establish the Trans-Pacific Partnership. But, Moon is applying to conjunction with Uranus in Aries in the 7th house square Pluto in Capricorn in the 4th. In addition to the expansive energy there is a brewing sharp conflict in international relations. The rulers of the 2nd and 8th houses of this chart, Venus and Mars, respectively, are in the 8th house showing dangers of financial losses, possibly involving debts. Mars in the 8th house does not bode well for international partnerships.

Raphael writes a daily Chinese astrological I Ching column. To see it go to http://raphael-fengshui.blogspot.com
Posted by Raphael Simons at 7:52 PM No comments: